For the third weekend in a row we were on the road again…this time down to Greenville, NC for Jeff’s series against East Carolina University. I was excited to finally be able to make it down for this trip, and it was the first time for the kids and I  to explore this great little city.

We left after work and started our drive around 230 pm. Between naps, snacks, and some coloring the kids managed pretty well for the close to 10 hour drive. We stopped a few times, once to eat dinner. We got in around midnight and went right to bed, excited to get the trip officially started in the morning.

Jeff’s game was not until 630 the first day, which gave us lots of time to check out the campus and the surrounding town. As usual, our favorite way to explore is by running so the kids got in the stroller and we cruised around. The neighborhood behind our hotel was absolutely beautiful and before I knew it, I had gotten in 10 miles. Felt great to get the legs moving after such a long ride the night before!

Thanks to all of our traveling,  I consider myself a great packer. However, there always seems to be one pretty significant item I forget on each trip (my first trip with Ava when she was less than a year old it was diapers…kind of important!). This time is was shoes! Of course I had my Asics to run, but that was it! Meanwhile the kids each had at least 3 pairs in their suitcase. So in our downtime between the run and the game, we got to shop! Since it was a late game, I also took the kids for dinner…although they would have been happy eating popcorn and drinking hot cocoa at the stadium.

Saturday’s game was a 4 o’clock start, so another great day to get out and explore. After breakfast, I headed down to the treadmill since it was raining and got in a great run before Jeff had to leave for the stadium. While we were getting ready for the day, he texted me to let me know there was a kid fest at the convention center, which was about a 2 minute walk from our hotel. Perfect! We headed out and the kids had a lot of fun. There were lots of vendors and activities, from arts and crafts, to “nature walks” to reading stations; with lots of free books to take home,  and much more. The Greenville fire department was there as well and had some pretty neat activities, including letting the kids sit in the trucks. They loved it!

By the time we left, we had enough time to hit our new favorite Panera and then we were back at the stadium. Nolan once again had a nap and Ava and I watched. It was a chillier night but still felt great to sit outside for a ballgame. I absolutely love to watch Jeff coach, and Ava is so proud of him and his team. They lost a tough one in the last inning, but still a fun night. It was late by the time we got back to the hotel, so I stayed in with the little ones while Jeff had dinner out with the coaches.

Sunday we started all over again. Breakfast, treadmill, and then packed up so we could head home straight from the game. Nolan fell asleep in the stroller walking from the parking lot to the stadium, which was great because it was freezing so I could just keep him covered and warm. Ava, who “never gets cold” had her first experience using hand warmers in her coat pocket which was the coolest thing ever to her. The stadium was pretty empty due to the weather, so she got lots of attention from “Peedee” the Pirate, ECU’s mascot. He had some fun dance moves and I think they may have high-fived for a half hour straight. These are the memories I love seeing my kids make. She had a huge smile through the whole game and Daddy’s team won! It was the first win this season that she was there for and she was beyond excited. Love it. 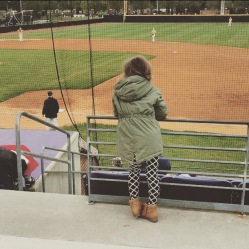 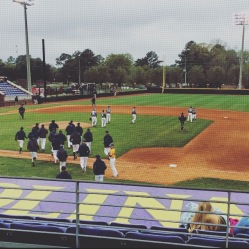 Ava is now at the age where she will sit and watch the game. She’s still learning how it all works, so any time the crowd cheers or someone claps, she says, did daddy win? It’s cute, and I love that she is taking an interest and now wants to understand what is going on. Nolan is two, so….I’m sure you can guess how well he will sit through 9 innings. It’s tough because I really do enjoy watching the games but have to make sure they are happy and of course safe from foul balls (something I will never stop being nervous over). However, he won MVP of all 3 games in the series thanks to some pretty impressive naps. A little Thomas and Friends on you tube and the kid was out. Whatever works!

So now began the trip home. Since Nolan decided to sleep the entire 3 1/2 hour game, he was wide awake for the drive! It went way better than I would’ve guessed, and we made it home around 1 am…to some snow.

It can be tough and exhausting going on these trips, constantly packing and unpacking, but I am beyond grateful for the life experiences it gives my family. I’ve always loved the quote, “Collect moments, not things.” The memories and time together we have is so important to me and I wouldn’t change it for anything. My kids have been able to see so many places and the stadiums and campuses are full of history. 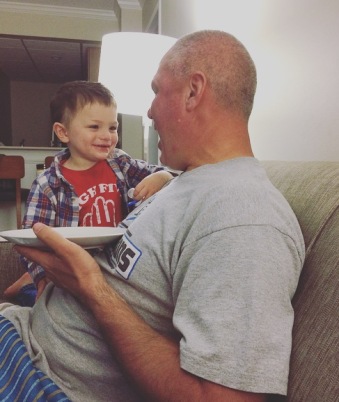 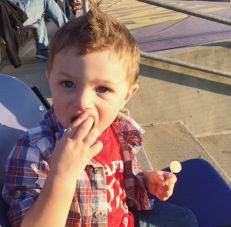 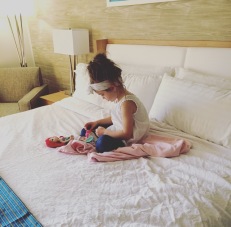 We now have a few weeks until our next road trip. I’m hoping all of the unpacking and laundry from the past 3 weeks is done by then…

Fell off the grid here for a bit, but still running! 192 miles for August, which is a lower total than the past couple months but considering everything that’s been going on I’ll take it! AND my run steak is still in tact...today was day 114! August has been challenging...mostly because of all the dynamics involving going “back” to school for both me and my kids but ready or not here we go! There a some big changes and new challenges for all of us and I have not slept more than 3 hours straight for probably this whole month but we at least have a plan in place now and I’m just going to stay positive and embrace it the best I can. Lucky for me, my kids have been so adaptive and are excited! Another positive is the past couple days I’ve felt great running because the weather has been fantastic...bring on the fall running temps! So here we go, September. All we can do is move forward and take it day by day! We got this. -
Bittersweet day over here! My @bobgearus days are over. Well really, they’ve been over for almost a year but I’m finally parting with the strollers. I had a really hard time with it but it’s time to move on. Today I ran 6.1 miles with these 2 either on their bikes or running with me on the track, so we have new family running traditions but my stroller miles are so special to me and I miss them soooo much. So here’s a special #tbt of some of our memories over the last 6.5 years...the last picture was our first time running with it ever. Those of you killing it with your joggers, treasure those miles mamas! You’re gonna miss it 🖤-
Plan was to get in 6 miles before my hematologist appointment today. While I was out running they called to let me know the office didn’t have power due to yesterday’s storm so I had to reschedule. Bummed that I have to now wait 2 more weeks for answers about returning to work, but grateful they called early enough that I got to sneak in 2 extra miles for a total of 8 today.
Today’s plan...set the alarm and get out for 10 miles. What actually happened: I hit snooze and was still exhausted when I got up. So I had a lazy morning instead. But then we loaded up the kid’s bikes and headed to a park with a 1 mile loop bike path and got in 4.25 miles. I convinced Ava to then run from that park to another park 1.5 miles away and the boys drove there to pick us up. She had to use the bathroom when we got there, so I ran the loop at that park until I was at 6.25. On the way home I got motivated to finish what I had planned, so I told the hubby to let me out and I ran another 3.75 home to get in all 10 miles! Obviously I like to make things as complicated as I possibly can 🤷🏼‍♀️. Oh well, it’s done and now we are relaxing before one kid has a t ball game and the other goes to a bday party, and hoping this tropical storm ends up being less than they predict tomorrow...be safe everyone! -
Kicking off August with 7 miles at one of my favorite parks to run in. We had t ball this morning so it was later in the day than I prefer but felt good to sweat. Avoided the back trails because bugs, but the main ones were all good. Ran the first half with the hubby but I wanted to keep going, so I ditched him 🤷🏼‍♀️. Shout out to my sista for swimming with the kiddos so we could get it done. Now we are getting ready to head to an outdoor play! Happy Saturday! -
For the third month in a row I was able to run at least 200 miles...even if I just made it this month! July was weird, well this whole Summer is weird...and I don’t even know if that’s the right word to describe it. I feel like I never got in a groove with sleep or workouts, and the lack of routine is really messing with me. The kid’s sports started back up and they had running camp this whole week so that helped a little. I probably am burning more calories worrying about EVERYTHING lately but these miles help ground me for sure. I know I’m not alone...if you know, you know...am I right? Hoping August brings more answers, more of a routine and most of all more sleep. We got this! -
There is no change where there is no action. -
My best little running buddy is 10 today! Kicked off her special day with a 1.0 mile run, in her new running shoes which were one of her presents. I’d like to say we ran it together but she was flying! Now we are off to the beach and dinner later for some oysters (her fave) and cake. -
This heat has to stop soon, right? Ugh a girl can dream I guess. Ran back to back 8 milers today and yesterday...and I decided that the only option to avoid the heat is to set an alarm for the middle of the night, run and then go back to sleep. Which will never happen for this girl...so I’ll just keep whining about it 😂. Glad I got it done early at least. Rest of the day will be baking, swimming, soccer, and some birthday prep for my favorite girl who is turning the big 1-0 tomorrow! -