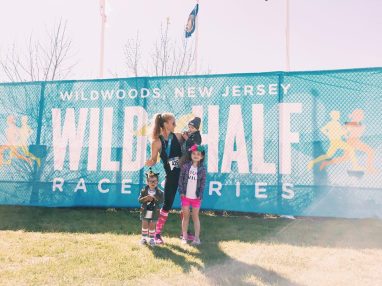 This past weekend we went down to Wildwood, NJ for not only a half marathon, but a quick fun getaway with some of my family and friends. I did this half marathon last year as well, and it’s a really fun race and Wildwood is a great family beach town, so what’s not to like?

My parents, sister, niece, and my kids headed down Saturday afternoon after swim lessons and gymnastics (tired them out to ensure a good nap on the ride). Also joining us were my friend Beth (the same friend who did her first half with me in Asbury) and her two daughters. Her older daughter, Faith is a former swimmer of mine who signed up for this to be her first half marathon!

The trip was easy, and we got there right in time to check into the hotel. Little did we know when we made the reservation that it was directly across the street from the bib pickup site on the boardwalk, and only a few blocks away from the start! I just love when things work out like that! We headed up to the boardwalk, and easily got our bibs, packets, shirts, and ride wristbands. One of the great thing about this race series is that with your registration you get a free 2-day pass for the rides at Morey’s Piers!

So at that time, Beth, Faith, Ava, and myself split from the group and headed down to the beach. The rest of our crew headed to the rides but we met up with a group of runners for some beach yoga, also a bonus of this race series. The instructor was great and it was perfect after a long morning and ride down.

When we were done, we met back up with everyone and continued to enjoy the rides and fun atmosphere of the boardwalk. The kids had a blast. As far as I’m concerned, this is what these weekends are about. Sure, I put in the time to train for the runs, but making it a whole family event is the most important to me. In fact, it is probably my number one motivator in my training!

As we were deciding to head back to the hotel and get ready for dinner, the dark clouds started rolling in. We made it back to the hotel just in time before the thunder and lightning and as soon as the storm passed we headed to the Boathouse for our pre-race dinner. We went to the same place last year and the food and atmosphere is perfect to bring kids and the view over the water is beautiful. We headed back to the hotel and I got everything organized for the morning.

On the morning of the race, we grabbed a bite to eat, got dressed, and walked up to the start just before the playing of the national anthem. The starting line was super organized and not too crowded the way they space out the pace groups which was a nice change! A few minutes later we were off.

Just to start off…

If I’m going to be totally honest with my race experience, I will have to apologize for sounding slightly negative. I really struggled during this race but hope it does not come off as sounding like I had a bad experience.

So as soon as I started to run my hip, which I never have issues with started to hurt. It scared me a little since there was no warning and I actually thought that maybe I should stop. Instead I decided to just hang  back and run a bit to see if it loosened up. Eventually it did, but I was worried about it.

Within the first mile we were heading north on the boardwalk. The spectators were really great. I remembered from last year how supportive the crowd and race volunteers are for this series and it helped to regain my stride knowing the support I would have throughout the race. The WildHalf series is not just a half marathon, there is also a 5k and 8k option for runners. They do a great job of clearly marking the course for each distance. It was super windy that day, so some of the mile marker signs were blown down, but my Fitbit takes care of that for me anyway.

I still cannot tell you exactly which direction the wind was blowing that day, but I can tell you that no matter which direction we ran, it seemed to be against us. It was a challenge, but growing up running around the beach, this is nothing new to me, and I don’t mind the challenge. When you run into the wind, however, your core and upper body become even more engaged which for me anyway, means more soreness the next day.

Around mile 4.5 is where the challenges of this course that I love really begin. The course is pretty much an “out and in” loop. At this point you cross over a highway overpass with a nice steady incline and down to an old high drawbridge. As I climbed the bridge, I was actually a little scared of being blown over! I had no one around me at that point so nothing to block the wind and it was strong!

I made it out to the turnaround, which I was really looking forward to. This was the first race in a while where I knew a good amount of people running. Once you turn around, you see all of the other runners for about a 3 mile stretch. So I got to see everyone I knew that was also out there! It’s a great distraction and really makes this race fun. The other runners were really enthusiastic and we all gave thumbs ups and words of encouragement, high fives, waves, whatever. I was almost laughing at this point as I headed back over the high bridge because I was being blown into the other side of runners. I won’t soon forget that!

I really did not feel right through this race. If it wasn’t for the volunteers and the high number of water/powerade stations they had I am honestly not sure I would have finished. My blood sugar felt off, my legs felt dehydrated, and the wind was definitely tough. At one point a man at one of the stations ran over to ask if I was ok, I’m thinking I must have been pretty pale at this point.

As I passed the 12 mile mark, I started to realize that I wasn’t doing as poorly as I thought and there was still a chance of going under 1:40, which is a personal goal I have. I just kept pushing through and at this point being up on the boardwalk with lots of crowd support I started to feel a bit better. Before I knew it, I could see the finish and crossed just above my goal, at 140.11. Still a personal best, and I was just so relieved that I pushed through those miles and never gave up on myself.

I found my family and headed over to Fox Park where the food and stage were for the after “party”. Ava joined me and picked out some goodies, the volunteers were awesome and gave her some of her own too…chocolate chip cookies, bananas, apples, bagels, soft pretzels, and more. I sometimes think my kids really only enjoy these races for all the food I get after! We took a quick pic on the step and repeat and then headed back to the finish line to watch everyone else finish.

I always enjoy watching the finish line and seeing the variety of people who run these races. Young, old, some finish holding hands, some sprint past people and keep that competitive spirit going until the end. There were even dogs crossing the line! This race just has a great vibe at the finish and the announcer was great too. So fun. Soon I saw Faith and Beth who both looked amazing and happy and I was so proud of them! Faith had completed her first half marathon with a smile on her face, and Beth had taken close to 20 minutes off her time from her first 13.1 only a month before. So awesome!

I headed back to the park with Beth and we checked out the tents once again. At this time the band was playing at the stage so the kids were having a blast. We sat down to listen for a few minutes and they began to announce the awards. Ava asked if she could come up with me for mine, and I laughed and told her I would not be getting one today. A few minutes later, they were announcing women 35-39 and wouldn’t you know it…they said my name as placing 3rd! I was shocked and Ava was over the moon excited to go up! We took some pics and then quickly headed back to check out of the hotel.

The day of the race just happened to also be my niece Rowan’s second birthday! I was honored that she woke up way before her usual wake up time to come cheer me on, and was looking forward to spending the rest of the day celebrating her. Between the wind and the cooler temps, our best bet was to find an indoor activity. We drove up to Atlantic City to the aquarium, which is really a cute place if you’ve never been. They have some touch tanks, turtles, stingrays, jellyfish, and lots more fish plus an observation deck on the top floor and a pretty garden area out front. It’s right on the water in a very pretty spot away from the hustle and bustle of the casinos.

After the fishies we headed to the Rainforest Cafe for dinner (I was beyond starving at this point!). They sat us in a big booth, which normally is great but poor Rowan was terrified of the ape over the table next to us. Nolan was not a huge fan either, but Ava loved it! We all got burgers or dinosaur nuggets, and much to my husband’s surprise I even caved for some souveneer cups! We had a great family dinner with my sister and parents complete with a huge volcano cake and then headed home to open some presents with the birthday girl. I’m not sure I mentioned that Jeff was not on this trip with us due to baseball, but by then his games were over and he met us at my parents and got to celebrate her big day too.

The weekend was fantastic. Like I have said before, I love how running can bring us to so many fun places and love making these races into mini family vacations and new experiences. The Wild Half series is just so great and they really do take the steps to make it a great weekend for not only the runners but the spectators and families too. I plan on running it again next year. 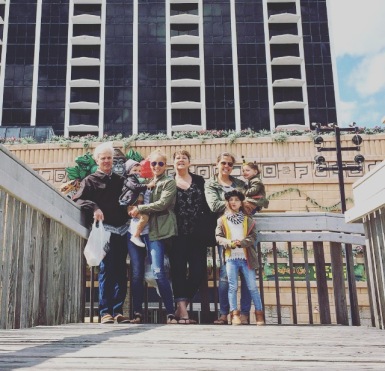 A few days after the race we received an email that the course may have been slightly short. They apologized and offered runners a discounted rate for next year which I thought was really impressive. That being said, I’m actually very happy that I did not go under 1:40, and can now do so on a more regulated course. Everything happens for a reason, right? 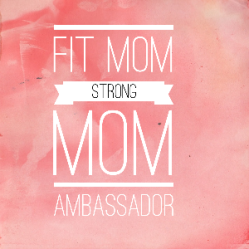